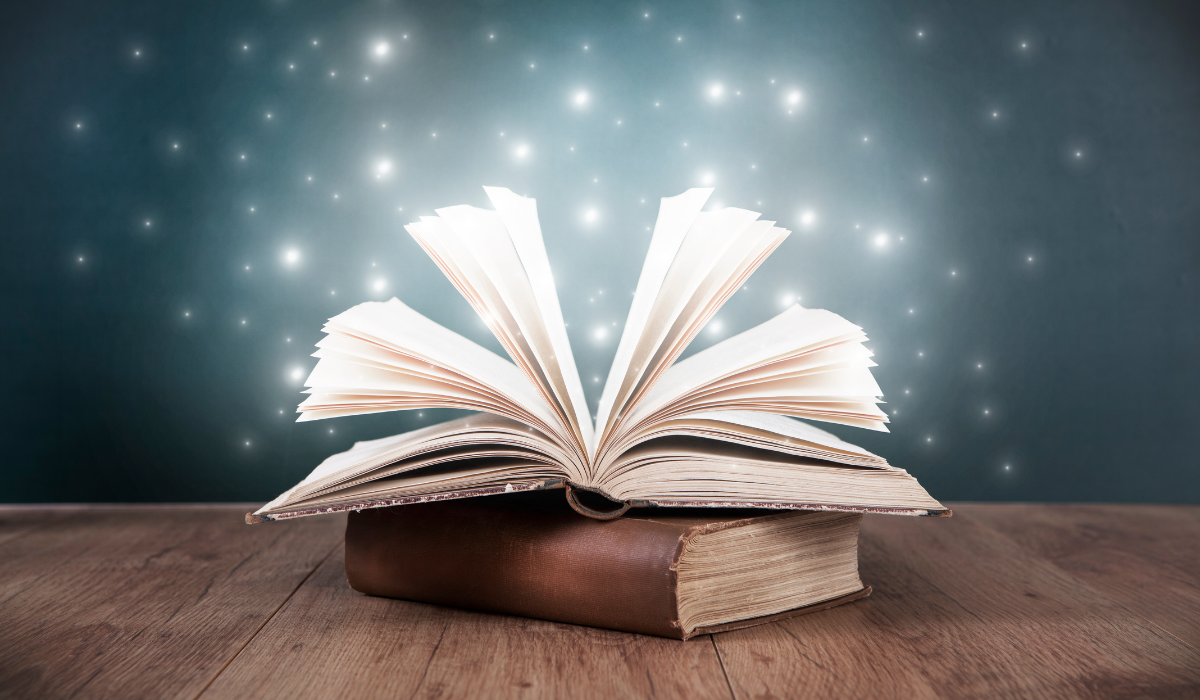 Well, this “Public Domain Day” of January 1, 2023 we’ll see some books from some heavy hitters. Authors like Agatha Christie, Ernest Hemingway, and Virginia Woolf among others have works that will become part of the public domain. This article will cover some of the titles hitting the public domain, and provide a brief bio of each author just in case you’re not familiar with them.

Before we dive into the books going into public domain in 2023, let’s get a little background in book copyright laws. Keep in mind that every country has its own copyright laws, so you’ll want to do your own research if you’re not located in the United States. These copyright laws mentioned below are focused on the U.S.

Who Is A Copyright Owner?

How Long Does Copyright Protection Last?

How long copyright protection lasts depends on when a given work was created. Here is a paragraph from Copyright.gov about the duration of copyright.

The length of copyright protection depends on when a work was created. Under the current law, works created on or after January 1, 1978, have a copyright term of life of the author plus seventy years after the author’s death. If the work is a joint work, the term lasts for seventy years after the last surviving author’s death. For works made for hire and anonymous or pseudonymous works, copyright protection is 95 years from publication or 120 years from creation, whichever is shorter. Works created before 1978 have a different timeframe. Learn more about copyright duration in our Duration of Copyrights Circular.

Here are the books coming to the public domain this new year! 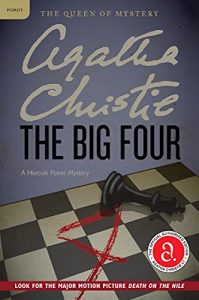 Synopsis: An unexpected visitor called Mayerling comes in through Hercule Poirot’s bedroom and collapses on the floor. The only clue to what he wants is his repeating Poirot’s name and address and writing the number 4, many times. When Hastings jokingly calls it “The Mystery of the Big Four,” the man begins speaking about an international crime cartel of that name. He describes the four leaders: Number 1 is a Chinese political mastermind named Li Chang Yen; Number 2 is probably American; Number 3 is a Frenchwoman; and Number 4 is known only as “the Destroyer.” The man dies soon after and Poirot and Hastings go off on the trail of the Big Four.

The Author: Agatha Christie (15 September 1890 – 12 January 1976) was an English writer known for her 66 detective novels and 14 short story collections, particularly those revolving around fictional detectives Hercule Poirot and Miss Marple. She also wrote the world’s longest-running play, the murder mystery The Mousetrap, which has been performed in the West End since 1952. A writer during the “Golden Age of Detective Fiction”, Christie has been called the “Queen of Crime”. She also wrote six novels under the pseudonym Mary Westmacott.

To The Lighthouse by Virginia Woolf (Purchase Here) 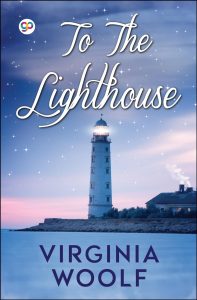 Synopsis: The novel centers on the Ramsay family and their visits to the Isle of Skye in Scotland between 1910 and 1920. The plot of To the Lighthouse is secondary to its philosophical introspection. Cited as a key example of the literary technique of multiple focalization, the novel includes little dialogue and almost no direct action; most of it is written as thoughts and observations. To the Lighthouse is made up of three powerfully charged visions into the life of the Ramsay family, living in a summer house off the rocky coast of Scotland.

The Author: Adeline Virginia Woolf (25 January 1882 – 28 March 1941) was an English writer, considered one of the most important modernist 20th-century authors and a pioneer in the use of stream of consciousness as a narrative device. Throughout her life, Woolf was troubled by mental illness. She was institutionalised several times and attempted suicide at least twice. According to Dalsimer (2004), her illness was characterized by symptoms that would today be diagnosed as bipolar disorder, for which there was no effective treatment during her lifetime. In 1941, at age 59, Woolf died by drowning herself in the River Ouse at Lewes. 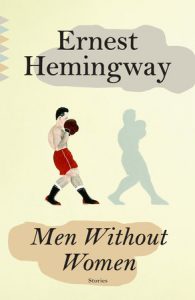 Synopsis: Men Without Women (1927) is the second collection of short stories written by American author Ernest Hemingway. The volume consists of 14 stories, 10 of which had been previously published in magazines. It was published in October 1927, with a first print-run of approximately 7600 copies at $2. The subject matter of the stories in the collection includes bullfighting, prizefighting, infidelity, divorce, and death. “The Killers”, “Hills Like White Elephants”, and “In Another Country” are considered to be among Hemingway’s better works.

The Author: Ernest Miller Hemingway (July 21, 1899 – July 2, 1961) was an American novelist, short-story writer, and journalist. His economical and understated style—which he termed the iceberg theory—had a strong influence on 20th-century fiction, while his adventurous lifestyle and public image brought him admiration from later generations. Hemingway produced most of his work between the mid-1920s and the mid-1950s, and he was awarded the 1954 Nobel Prize in Literature. He published seven novels, six short-story collections, and two nonfiction works. Three of his novels, four short-story collections, and three nonfiction works were published posthumously. Many of his works are considered classics of American literature. 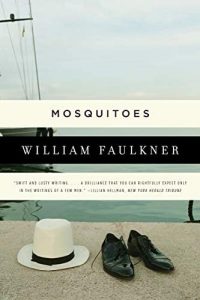 Synopsis: Faulkner’s second novel follows a bohemian cast of artists, socialites, and dilettantes as they set sail on a four-day excursion aboard the Nausikaa. Faulkner’s quick wit and endless appetite for satire make this audiobook a fascinating exploration of character, as well as a rare glimpse into the author himself. The novel explores questions of sex and sexuality, as well as the societal role of the artist. Inspired by his own participation in the arts community in New Orleans, Mosquitoes is an engaging and delightful novel from one of America’s greatest writers.

The Author: William Cuthbert Faulkner (September 25, 1897 – July 6, 1962) was an American writer known for his novels and short stories set in the fictional Yoknapatawpha County, based on Lafayette County, Mississippi, where Faulkner spent most of his life. A Nobel Prize laureate, Faulkner is one of the most celebrated writers of American literature and is considered the greatest writer of Southern literature. 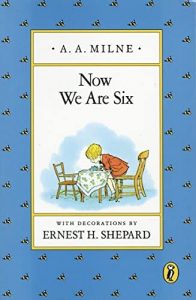 Synopsis: Whether you’re six, sixty-six, or anywhere in between, this enchanting collection of verses about Christopher Robin and, of course, Winnie-the-Pooh, will enchant. Filled with gentle humor and playful rhythms, Now We Are Six contains some of the best-loved poems for children. Between its pages, readers will delight in the always accessible, sun-filled realm of the imagination, perfectly rendered in Ernest Shepard’s beautiful illustrations. The essential book for that all-important birthday, Now We Are Six is a classic in its own right, treasured by every new generation of readers.

The Author: Alan Alexander Milne (January 18, 1882 – January 31, 1956) was an English writer best known for his books about the teddy bear Winnie-the-Pooh, as well as for children’s poetry. Milne was primarily a playwright before the huge success of Winnie-the-Pooh overshadowed all his previous work. Milne served in both World Wars, as a lieutenant in the Royal Warwickshire Regiment in the First World War and as a captain in the Home Guard in the Second World War. Milne was the father of bookseller Christopher Robin Milne, upon whom the character Christopher Robin is based. It was during a visit to London Zoo, where Christopher became enamored with the tame and amiable bear Winnipeg, that Milne was inspired to write the story of Winnie-the-Pooh for his son. 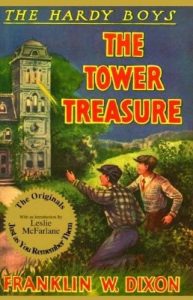 Synopsis: This is the original 1927 story of The Tower Treasure: The Hardy Boys Book 1. Frank and Joe Hardy, brothers who are high school students, use their investigation skills to solve the mystery of the stolen treasure from the eccentric Applegates. After finally finding out who did it, the dying criminal confesses that the loot had been hidden “in the old tower.” The tower is searched in vain, but it remains for the Hardy boys to make an astonishing discovery that cleared up the mystery. Much has changed in America since 1927. The modern reader may be delighted with the warmth and innocence of the characters, but uncomfortable with the racial, social, and sexist terms and stereotypes.

The Author: Franklin W. Dixon is the pen name used by a variety of different authors who were part of a team that wrote The Hardy Boys novels for the Stratemeyer Syndicate (now owned by Simon & Schuster). Dixon was also the writer attributed for the Ted Scott Flying Stories series, published by Grosset & Dunlap. Canadian author Charles Leslie McFarlane is believed to have written the first sixteen Hardy Boys books.

Other Titles Entering Public Domain in 2023 Include:

You can review the 2023 public domain list of books, among other artistic works hitting the public domain by visiting this list put out by Duke Law. 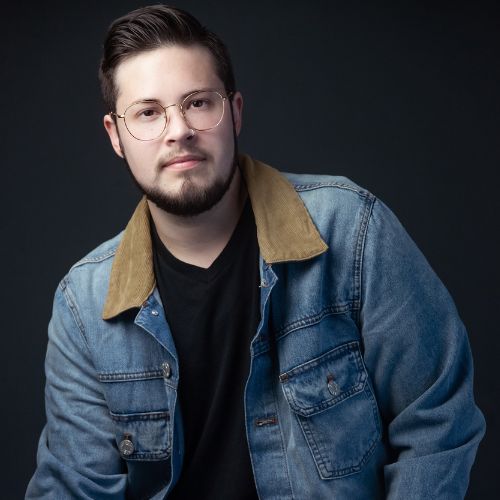 Mel Beasley has a bachelor’s in creative writing and journalism from the University of North Carolina at Wilmington. He brings 9+ years of digital marketing and writing experience to the table by writing for publications such as Lumina News and Encore Magazine. He spent 2 years as a college-level writing tutor, and is a certified writing tutor through the CRLA, which is a prestigious cert recognized by the Association for the Coaching & Tutoring Profession. He is a professional SEO blogger with experience writing for brands such as Boardworks Education and The Greater Wilmington Business Journal. One of his latest website and marketing projects has been building the website for the now New York Times Bestselling author, Nina de Gramont.